Today we spotlight the work of British Tibetan artist Yangdzom Lama. Yangdzom uses a range of a Tibetan symbols and iconography, such as mythological references and her style calls back to traditional Tibetan line drawings and paintings. Yangdzom highlights our topic of resilience through an oil painting depicting the forceful sterilisation of Tibetan women in China. She speaks to us about her reaction to finding out such news.

First, some background to understand the tense situation between Tibet and China. In the 1950’s China invaded Tibet and declared the country a part of China, whereas the exiled Tibetan government view their country as under unlawful occupation by the Chinese.

Can you explain what forced sterilisation is and what the consequences are for the women in Tibet?

After a bit of research I was disturbed by the reports I read. During the one-child policy, Tibetans were allowed no more than two children. This disproportionately affected Tibetans and marginalised communities in China.

If a woman was pregnant with a third child and could not pay a fine (most couldn’t) they were subject to forced abortion (including late-term abortions) or sterilisation. The subjugation does not end here, as refusing to abide by this ‘law’ could result in withdrawn child support or even denial of medical treatment.

How does your work express the theme of resilience?

I wanted to make a painting dedicated to the resilience of those women who had gone through such a traumatic, devastating experience, especially since this was a form of violence aimed directly towards women.

In the painting, I show a Tibetan woman seated like a Buddha, her eyes sad yet her posture strong, and within her belly is a little baby Buddha, shining radiantly. Buddhism is the dominant practiced religion in Tibet, so the dual Buddha symbology references a key strand of Tibetan culture. The woman will not be knocked down and is surrounded by the natural landscape of Tibet, her home.

Can you talk a little bit about your style as an artist through your work?

My work offers an outlet for my personal life and emotions. It also offers me the chance to transcend boundaries and to proudly express my heritage in a visual format. ‘The Deer Goddess Comforting The Ignored Lady’ stemmed from a relationship that I’d been in for three years, and then on Christmas Day 2019 we broke up. Of course, I felt devastated, and then quickly after that I tried to block it out and distract myself so that by the time lockdown started, I really wasn’t feeling prepared; I wasn’t in the right headspace to healthily deal with difficult emotions. That’s why I made this painting: to comfort me and to help me endure through adversity. I wanted to finally start confronting how I was feeling so I could begin the process of healing. 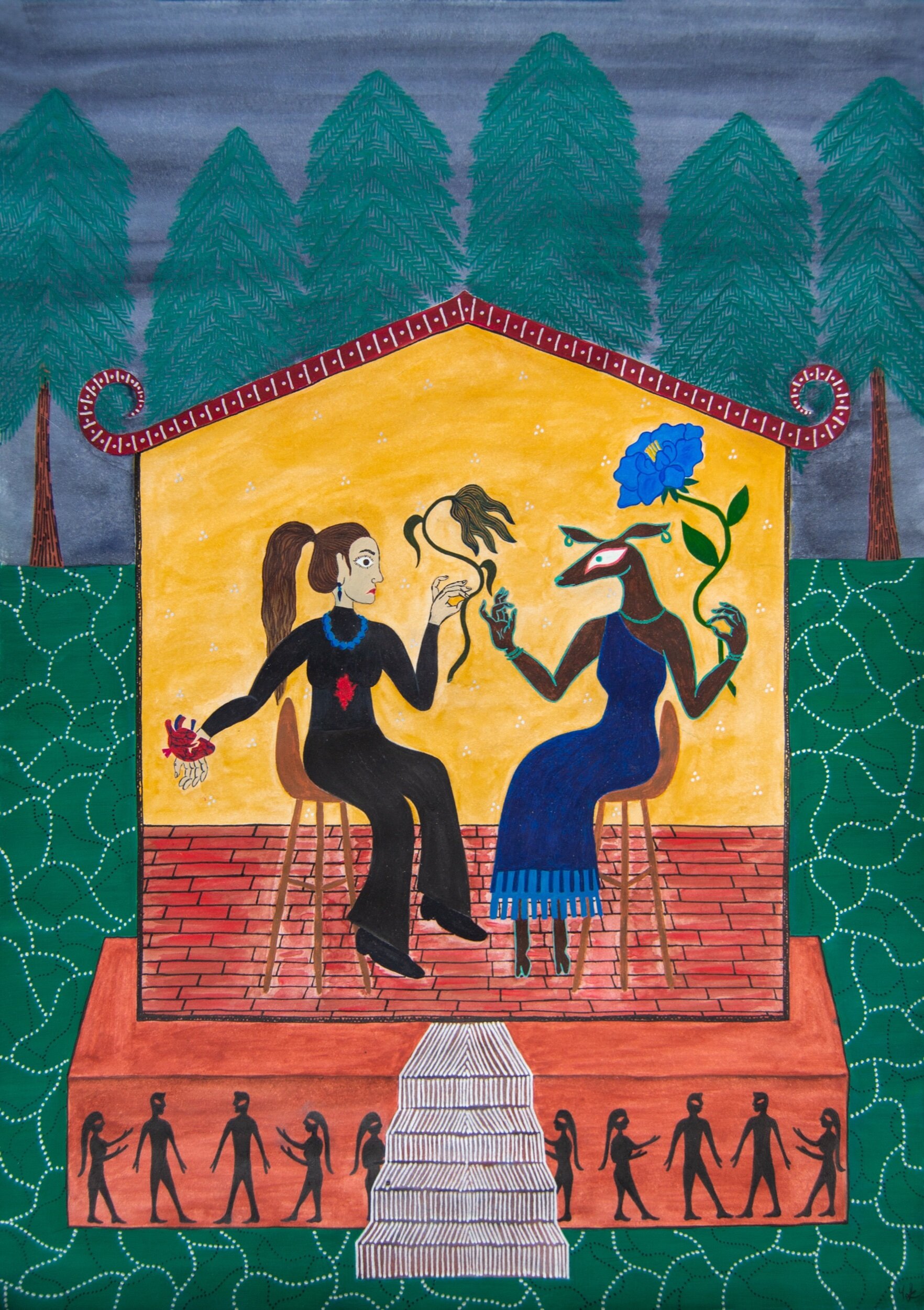 In the painting, I’m trapped in my home, my heart physically ripped out from my chest. I’m holding a wilted flower but the Deer Goddess offers me a new, blooming flower. I see the Deer Goddess in two ways: firstly, she is a representation of (mostly) the women in my life comforting me over the loss of a man I loved. Secondly, she is a higher version of myself knowing and reasserting that everything is impermanent and that things do not last forever (including the suffering I was feeling at the time of painting this image).

What is the meaning of the intricately embroidered piece ‘Sam the Crocodile’?

Crocodiles are perceived as terrifying predators, with their sharp teeth and grip that does not let go of their prey. They are hard, their skin like armour, and able to go without food for a long time, waiting patiently through tough seasons. In this way, the piece can be directly related to perseverance and resilience. But Sam the Crocodile seems quite jolly to me, especially with his toothy grin and the light pink felt as the background. With this embroidery, I’ve tried to turn a frightening animal into a friendly being. They’re not just predators with tough exteriors that must be hated, but are rather capable of strength in a positive way. Even though I’ve imagined Sam as a male crocodile, I must point out that what I find really endearing about crocodiles (and alligators) is that they are excellent mothers. Crocodiles also embody resilience as a predator that has existed since prehistoric times. They’ll guard the nest while their eggs incubate, and then once they hatch, the mother will carefully carry them to water in her jaws and protect them for the first couple years of their lives while they learn how to navigate this big, scary world. They are creatures perfectly adapted to dealing with adversity.

What other themes are important in your work?

Celebration and rejoicing is something I am drawn to. In ‘Dancing Lady with Her Dancing Horse’ both horse and lady are swirling about in ecstasy. Dancing, for me, is all about letting go of inhibitions and releasing energy; it’s all about being free and liberated. It could be interesting, however, to consider why the two characters are celebrating. People often celebrate during or after hard times as a way to maintain hope and keep ourselves going—many festivities are in winter, for example, or parties usually happen after a five-day working week—so perhaps the horse and lady have endured a tough period and now it’s time for them to dance off any negative energy and rejoice over the good things in life. The interpretations of my paintings are left open, I enjoy that someone else may see something in my work that I had not intended there before.

Similar to the ‘Dancing Lady with Her Dancing Horse’ box, the characters in this painting are bright, stylised people with swirling limbs, although this time the setting is darker, a deep purple with a lighter purple spotlight over their circle. It reminds me of a stage, with an unseen audience watching. I think this painting is about performance and entertainment rather than resilience, especially with the masked characters who are putting on a show. It could also be about hiding since the background is all shadowy, and their faces are literally covered with masks, each with different expressions so their real selves aren’t revealed.