Music has an inexplicable unifying nature. Hannah Shepherd examines the idea of resilience through a socio-political lens aimed at St Paul’s Carnival in Bristol.

Last July, I anxiously took a train from my hometown to the city centre of Bristol to begin collecting data for my undergraduate dissertation. I normally visit Bristol several times a year for fun with friends, but this trip was a little bit different. I was travelling to Bristol for St Paul’s Carnival – not as a spectator – but with the aim of speaking with those in the local community; the people of whom Carnival’s first organisers intended the celebrations to be for.

The experience went beyond a mere contribution to my degree mark. The conversations I had were eye-opening, inspiring and raw. It is clear that more awareness is needed to shine a light on the lives of local African Caribbean and black sound system engineers, radio hosts, disc jockeys, stallholders, attendees and residents. They have a huge stake in St Paul’s Carnival and concern for its future.

Over the years, the media have praised the formation of St Paul’s Carnival as a key event in Bristol’s calendar; a celebration of African Caribbean culture bringing people together through music and dance from all over the world. St Paul’s Carnival has grown in reputation and size over the years, drawing in crowds from the outskirts of Bristol and further afield. On the other hand, the media have also produced worrying headlines of funding cuts, restrictions, clashes between locals, organisers and the council, and possible cancellations in the future.

Throughout my research, I noticed that conversations in the media surrounding African Caribbean people in Bristol tended to frame their struggles within collective memories, as a thing of the past. There seems to be a lack of focus on the implications that recent tensions have for those the Carnival was arguably set up for, and this was an issue I sought to learn more about.

Accounts of racism and discrimination in St Paul’s and other areas of Bristol can be traced back many years. Arguably, a notable moment where these attitudes came to a head was the Bristol Bus Boycott in 1963, led by Roy Hackett, who emigrated to England in 1952. Hackett wanted to challenge systematic racism in the local area by fighting for the rights of non-white members of society who were being denied employment in local bus companies.

Like Hackett, hundreds of other African Caribbean and black people first arrived in England during this period following World War Two called the ‘New Commonwealth’ immigration. Many of those who came were encouraged to travel to Bristol, with promise of employment in struggling state-run services. They longed for acceptance, prosperity and hope for a new life. In reality, the vast majority of those who came faced a vicious greeting that seeped into all aspects of their everyday lives.

Following initial campaigns against racial discrimination of African Caribbean and black residents, Roy Hackett and a small group of organisers set up the first Carnival celebration in 1968, calling it St Paul’s, Easton and Montpelier Festival. Their aim was to challenge negative stereotypes of St Paul’s and to create an event which people could enjoy and feel a sense of community spirit in the local area.

In the few years following the first event, Carnival celebrations successfully continued each summer. Jamaican-style stalls lined the streets of St Paul’s; residents joyfully opened up their front gardens and sold a variety of African Caribbean food, drink, jewellery and clothing. Local school children, bands and other members of the community began to dress up in elaborate costumes and ride floats adorned in brightly coloured fabrics.

On the morning of Carnival in 2019, I bustled through the streets of St Paul’s as the atmosphere became increasingly more energetic. I spoke with many local stallholders as they busily set up their trading posts for the day. Things had changed from the traditional set-up of street trading decades ago. They informed me of a formal application process now required to become an official Street Trader at Carnival. In line with licensing protocols and council restrictions, a Temporary Event Notices application has to be submitted for review, and many local stallholders agreed that the formality of the process diminished the enjoyment and casual nature of Carnival. I spoke with one local stallholder, who told me: 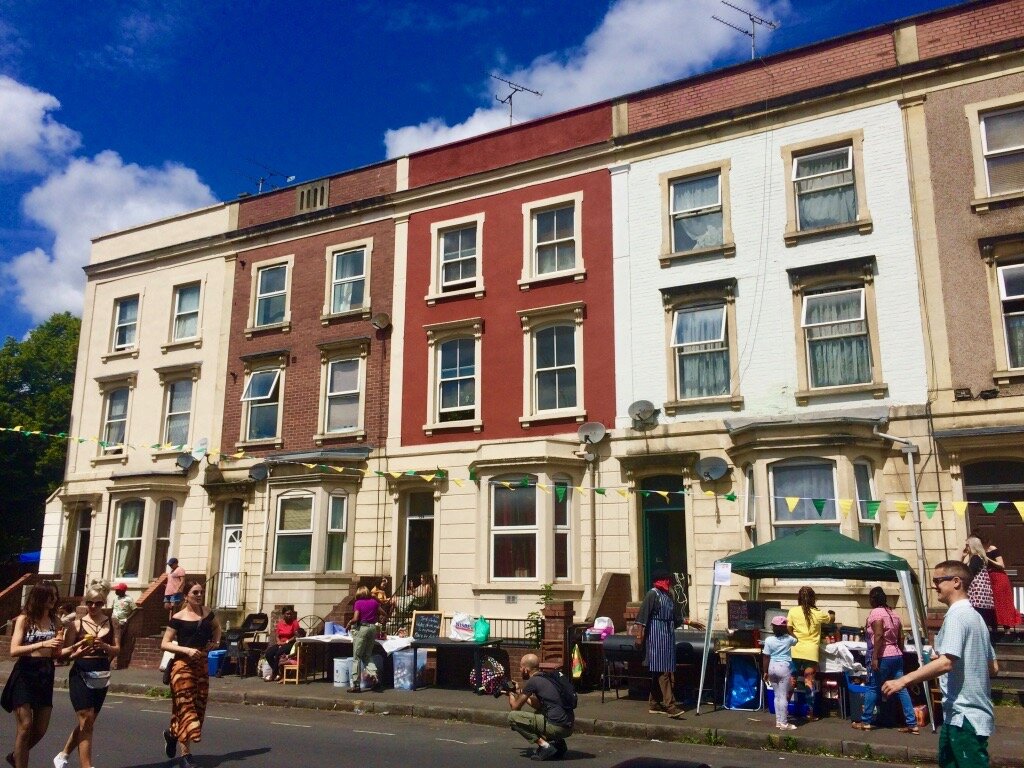 “People find that the council was turning it into a business as opposed to the fun part of it, you had to pay 500 pounds just to get a stall to sell something….”

He went on to say “Local people of St Paul’s used to just trade from their own gardens in the past. Because it started with the people in the first place, people used to just put out their food and stuff, the council had to get involved because of rubbish disposal and policing at the event…”

After a few decades of Carnival successfully entertaining locals and those who had heard stories of its splendour, sound systems began to join the Carnival celebrations as they lined the streets of St Paul’s. The sound systems allowed Carnival to continue later on into the evening, catering for lovers of African Caribbean music and its various sub-genres: reggae, dub, calypso and dancehall (to name a few). I was told by local attendees that this benefitted many parents who were able to visit Carnival during the day with their children, and briskly return later on in the night to continue the party.  A local disc jockey/sound system engineer who was born in Jamaica reflected on the importance of sound systems in helping new arrivals to the city.

In the midst of a climate of resistance to oppression and injustice, sound system music came to front alongside the emerging underground music scene in Bristol, gaining prominence in the 1980s. Sound systems emerged in St Paul’s as a direct result of their engineers feeling excluded from the city’s main music hotspots.

I spoke with a local reggae artist who was born in Jamaica but has since lived in various locations in St Paul’s:

“We used to have so many people gathered around, eventually we started toasting on the microphone, that’s how it started for me in St Paul’s – I used to hang around there – that’s where I put the sound systems, cos we couldn’t go into town, we felt too uncomfortable, so we made our own environment around there, much more chill. We’d have our parties, every Friday, Saturday, Sunday there would always be music there…” 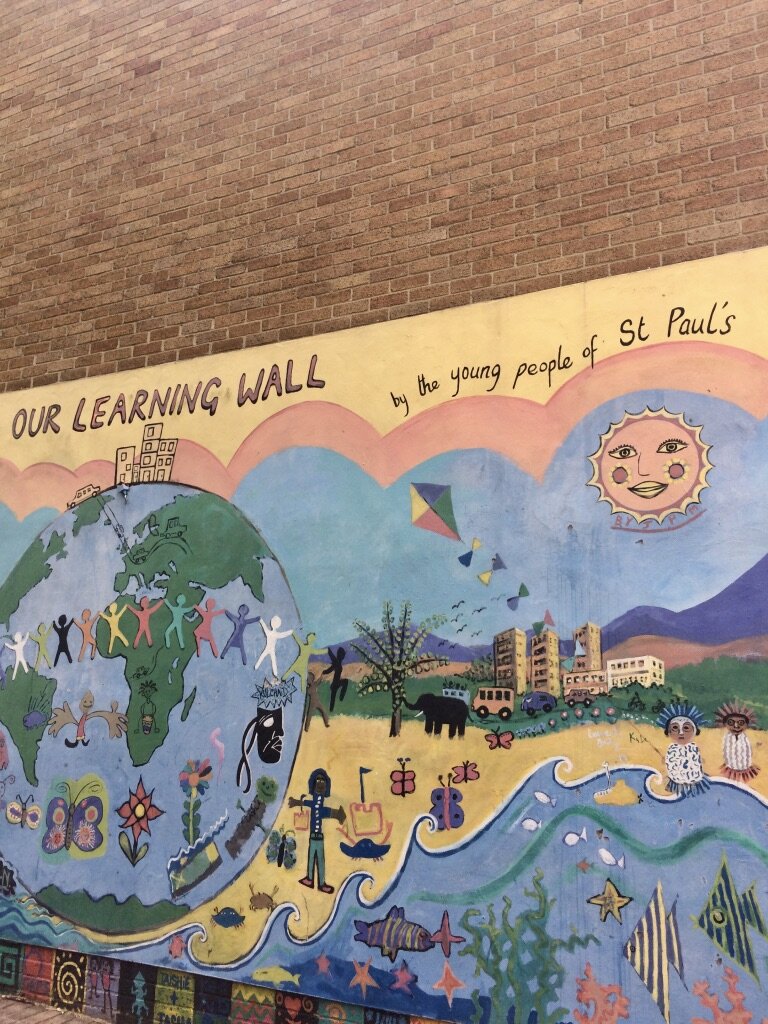 In essence, the sound system created a space for people who had emigrated to Bristol to transport themselves to another place in the African diaspora – back to the Caribbean.

In line with an increased sense of control over other aspects of Carnival, the laid-back vibe once associated with sound systems has clearly changed from when they first began performing at Carnival. Various interventions from the council over the years has altered the way sound systems can set up in St Paul’s – sound systems are issued licenses and given a specific location to set-up in and are now banned from playing past 10pm. I asked another local sound system engineer who regularly set up on City Road about the involvement of the council:

“The council put in too much in term of red tape. You know, to me, just start off with, shutting down early, then earlier, earlier, not saying we wanna go till’ 5 o clock in the morning. But some people bring their kids in the daytime and they wanna come back out at night you know. I think they degraded it a bit. I think they need to get more of the local people involved, more black people involved, cos it’s gone a bit down-town business. You know, that way it’s gone a bit ‘watered down’…

….There are too much people from out of town who knows nothing about this place, and then people will be stood watching carnival and they say, ‘well how come you ain’t up there?’ Well, I don’t know, gone a bit too much one sided. The sad bit is, black is no longer a big part of the sound system no more. They all do different things now. So, when I drop, no more black sound. White kids fair enough who took it up, but there’s no more black kids.”

Overall, there seems to be a sense of apathy and increased feeling of top-down control. Monitoring, structured management and the financial side of Carnival have clearly become more of a focus for the council and other officials who are involved in ensuring its future.

Over the last few months, I have been able to reflect on the knowledge and experiences shared from my time researching St Paul‘s Carnival. Over 50 years ago, when Carnival was first celebrated, it was hoped that this would open up a space where frequently marginalized, excluded and isolated African Caribbean and black residents could finally feel a sense of community spirit. It is clear that those at the fore-front of St Paul’s Carnival – the performers, the sound system engineers, the disc jockeys and the local residents who attend year on year to enjoy the sense of celebration, freedom and resistance it brings – feel a sense of loss and apathy towards Carnival becoming more regulated and controlled. If as a society, we are hoping to diminish the number of people feeling socially marginalised in our communities, perhaps this is something that needs more attention, when decisions about future Carnival are made again.